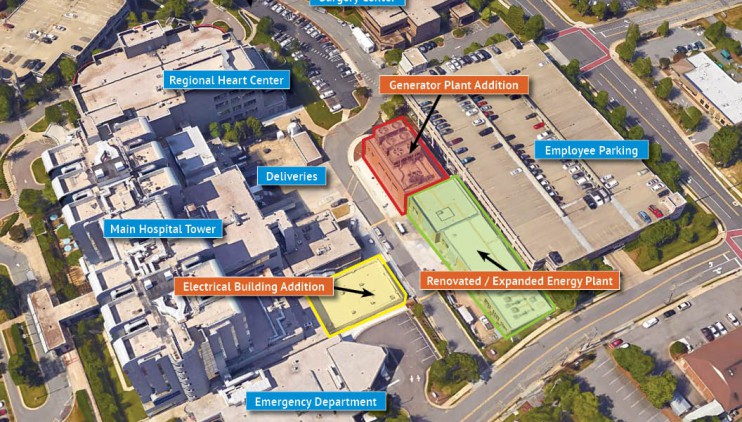 McCulloch England and Rentenbach Constructors have been notified that they will be presented with the 2015 Carolinas AGC Pinnacle Award for Large Building Projects at the Carolinas AGC’s 95th Annual Convention in Charleston, SC, in January.

Project Overview
About High Point Regional:
Situated in the northwest corner of High Point’s central business district, High Point Regional Hospital is the city’s largest and most important center for medical care. Following a merger completed in April of 2013, this formerly independent hospital founded in 1904 now operates as a private, not-for-profit member of the UNC system. High Point Regional serves over 120,000 patients each year, and offers 351 private beds. Starting with space for only 12 patients at its founding (when High Point had 6300 residents), the hospital continued to expand over the following decades. In the late 1970’s, the hospital considered relocating for ease of expansion, but ultimately made a momentous decision to continue growing at its historical downtown site. The present facility that was completed in the 1980’s is characterized by a densely-built, compact and busy campus anchored by a seven story main tower.

The Infrastructure Improvement Project:
With most of its power and utility infrastructure over 30 years old, HPRH was under constant threat from a failure of aging and strained mechanical, electrical, and HVAC systems. The hospital needed new emergency generators, new water chillers to provide air conditioning throughout the campus, and new electrical switchgear for both emergency and normal power delivery. Under UNC Healthcare’s direction, High Point Regional moved forward in 2013 with a plan for infrastructure improvements.

The board of directors sought competitive proposals for constructing what would be the largest and most complex construction management project in the hospital’s history. High Point Regional received numerous submissions from national and global leaders in healthcare facilities construction, and ultimately chose Rentenbach Constructors (A subsidiary of the Christman Company) for the strength of their pre-construction planning program and healthcare expertise.